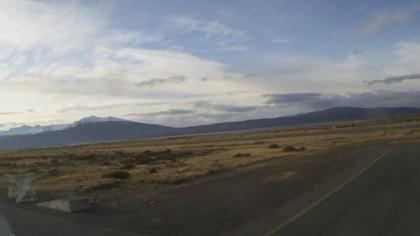 100%
Additional info
Teniente Julio Gallardo Airport, is an airport serving Puerto Natales, a city in the Magallanes Region of Chile. The airport is 7 kilometres (4.3 mi) north-northwest of Puerto Natales, which is on the Admiral Montt Gulf (es), a long fjord that reaches inland close to the border with Argentina. The airport is 12 kilometres (7.5 mi) from the border. Puerto Bories, about 4 km from downtown Puerto Natales, was a small "company town" whose focus was a "frigorifico"—a sheep meat and wool processing plant belonging to the Sociedad Explotadora de Tierra del Fuego. In addition to the plant complex, the private town eventually included a radio station, swimming pool, small dairy, recreational facilities, a police outpost, and housing for high-level company employees such as managers, engineers, and accountants. After most commercial activity at the freezer complex ceased during the 1990s, a tax auction was held and a number of mostly small private parcels were created and sold. Puerto Bories is somewhat unusual in that it retains a great deal of its "private town" nature, as even the town plaza and roads belong to property-owning members of the small community. As of the year 2012 Puerto Bories has featured three hotels and some minor commercial activities.Puerto Natales is a city in Chilean Patagonia. It is the capital of both the commune of Natales and the province of Última Esperanza, one of the four provinces that make up the Magallanes and Antartica Chilena Region in the southernmost part of Chile. Puerto Natales is the only city in the province. It is located 247 km (153 mi) northwest of Punta Arenas. It is the final passenger port of call for the Navimag ferry sailing from Puerto Montt into the Señoret Channel as well as the primary transit point for travellers to Torres del Paine National Park, Chile.
Camera location

Reasons to Set up live buffering ip camera on your blog such as Chile webcam?

Want to make your company productive? If so, within this period of challenging competition, you can actually be prominent among your rivals by providing something totally new for your customers and therefore a great idea in connection with this is actually to install live streaming ip camera to your site. Viewers of the web site might not be in a position to see your business and its features actually hence an ideal way presenting your company functions to them is via live ip camera. There's a huge effect of live cam in your site traffic and even it's a great way to market your business and its features. A lot more advantages of a live camera (Chile) consist of:

This will depend on yourself what you require to exhibit via live camera. There isn't any restriction but you're just restricted to adopt General Data Protection Regulations. Installing a live cam to your website requires a little time however it's really priceless.

This web cam is the foremost element over the internet. In The Search Engines, you can see the place or even pictures of anyplace however in this site, you may enjoy the present sights. Hence, you can explore your preferred place to get info. All of the features of this specific blog tend to be wonderful. The advisable thing is that the live cam exhibits video clip of virtually any area from the appropriate perspectives.

Whenever we check around, we come across that there's a lot to discover. I've been curious to discover numerous areas. Amazing factor is it comes with an option to check out the earth online via this particular online webcam and i'm truly impressed.