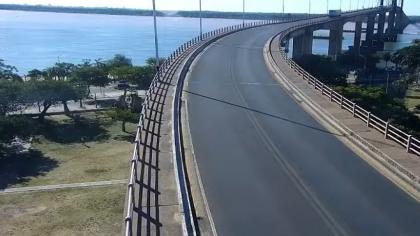 100%
Additional info
The General Manuel Belgrano Bridge is a road bridge that joins the Argentine cities of Corrientes and Resistencia over the course of the Paraná River. It was opened on May 10, 1973.Corrientes is the capital city of the province of Corrientes, Argentina, located on the eastern shore of the Paraná River, about 1,000 km (621 mi) from Buenos Aires and 300 km (186 mi) from Posadas, on National Route 12. It has a population of 346,334 according to the 2010 Census. It lies opposite its twin city, Resistencia, Chaco.Corrientes, officially the Province of Corrientes is a province in northeast Argentina, in the Mesopotamia region. It is surrounded by : Paraguay, the province of Misiones, Brazil, Uruguay, and the provinces of Entre Rios, Santa Fe and Chaco.
Camera location