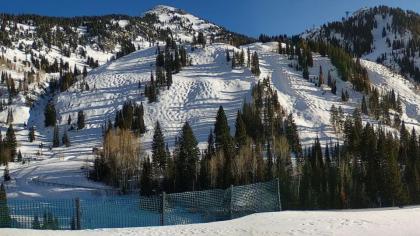 100%
Additional info
Snowbird is an unincorporated community in Little Cottonwood Canyon in the Wasatch Range of the Rocky Mountains near Salt Lake City, Utah, United States. It is most famous for Snowbird Ski and Summer Resort, an alpine skiing and snowboarding area, which opened in December 1971.Salt Lake County is located in the U.S. state of Utah. As of the 2020 United States Census, the population was 1,185,238, making it the most populous county in Utah. Its county seat and largest city is Salt Lake City, the state capital. The county was created in 1850. Salt Lake County is the 37th most populated county in the United States and is one of four counties in the Rocky Mountains to make it into the top 100. Salt Lake County is the only county of the first class in Utah - which under the Utah Code is a county with a population of 700,000 or greater.Utah is a state in the Mountain West subregion of the Western United States. Utah is a landlocked U.S. state bordered to its east by Colorado, to its northeast by Wyoming, to its north by Idaho, to its south by Arizona, and to its west by Nevada. Utah also touches a corner of New Mexico in the southeast. Of the fifty U.S. states, Utah is the 13th-largest by area; with a population over three million, it is the 30th-most-populous and 11th-least-densely populated. Urban development is mostly concentrated in two areas: the Wasatch Front in the north-central part of the state, which is home to roughly two-thirds of the population and includes the capital city, Salt Lake City; and Washington County in the southwest, with more than 180,000 residents. Most of the western half of Utah lies in the Great Basin.
Camera location

The great benefits of installing live streaming camera in your website

Science and technology carries on improving everyday and hence best news for business people is actually that these people can install live cam into their web sites to actually make the business or products much more observable and bring more and more clients. Mostly, the companies related with travels and tours, chairlift, rental houses, area services or sea side holiday resort like to benefit from the option of putting in live streaming cameras within their web sites. A live webcam is actually itself a live display of the business characteristics and thus you may attract the site traffic and convert them in to your potential customers. Would like to check out more regarding live webcam for instance United States? Here are these!

From travel and leisure to hotel industry, you can actually record just about anything in your site. In the limit of GDPR rules, you can utilize live webcam in your site in whatever way you have to. Take the time to set up a live webcam and obtain a number of advantages consequently.