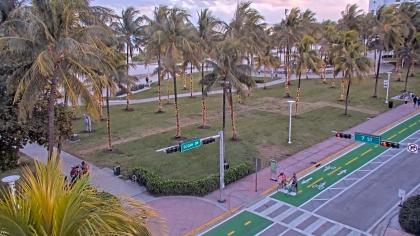 100%
Additional info
Miami Beach is a coastal resort city in Miami-Dade County, Florida, United States. It was incorporated on March 26, 1915. The municipality is located on natural and man-made barrier islands between the Atlantic Ocean and Biscayne Bay, the latter of which separates the Beach from the mainland city of Miami. The neighborhood of South Beach, comprising the southernmost 2.5 square miles (6.5 km2) of Miami Beach, along with Downtown Miami and the Port of Miami, collectively form the commercial center of South Florida. Miami Beach's population is 82,890 according to the 2020 census. Miami Beach is the 26th largest city in Florida based on official 2019 estimates from the U.S. Census Bureau. It has been one of America's pre-eminent beach resorts since the early 20th century.Miami-Dade County is a county located in the southeastern part of the U.S. state of Florida. The county had a population of 2,701,767 as of the 2020 census, making it the most populous county in Florida and the seventh-most populous county in the United States. It is also Florida's third largest county in terms of land area, with 1,946 square miles (5,040 km2). The county seat is Miami, the core of the nation's ninth largest and world's 34th largest metropolitan area with a 2020 population of 6.138 million people.Florida is a state located in the Southeastern region of the United States. Florida is bordered to the west by the Gulf of Mexico, to the northwest by Alabama, to the north by Georgia, to the east by the Bahamas and Atlantic Ocean, and to the south by the Straits of Florida and Cuba; it is the only state that borders both the Gulf of Mexico and the Atlantic Ocean. Spanning 65,758 square miles (170,310 km2), Florida ranks 22nd in area among the 50 states, and with a population of over 21 million, is the third-most populous. The state capital is Tallahassee and the most populous city is Jacksonville. The Miami metropolitan area, with a population of almost 6.2 million, is the most populous urban area in Florida and the seventh-most populous in the United States; other urban conurbations with over one million people are Tampa Bay, Orlando, and Jacksonville.
Camera location

Is it well worth to put a live streaming cam to your blog?

Setting up a live streaming cam within the site is undoubtedly an exceptional solution to advertise your business and its features. It is not important if it is a blog of a sea side holiday resort, an area services, an internet site of a restaurant or even a chair lift, or even a blog site centered on the tourism industry. A live cam view will obviously give a great impact on the traffic. In addition, the scene from the live streaming camera, just like United States:

You can actually shoot whatever you want. You're basically confined simply from your own will or... General Data Protection Regulations. It's easy to mount a live streaming camera within the site.

Relating to going to a recreation area, several things appear in your brain. Is definitely the recreation area delightful? Can it be extremely crowded? Which things you can enjoy at that place? Which kind of fun perhaps there is for your children? Why not undertake a web tour to the recreation area that you might want to travel to!

Enjoying a tour offers short term fulfillment yet remembering about this visit might take you back to those destinations, in that moment and even with those close persons who were actually with you there. Live web camera is a wonderful option to Reminisce about the stunning recollections just as you will discover those destinations live at your home.