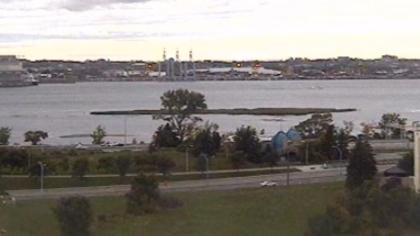 100%
Additional info
Longueuil is a city in the province of Quebec, Canada. It is the seat of the Montérégie administrative region and the central city of the urban agglomeration of Longueuil. It sits on the south shore of the Saint Lawrence River directly across from Montreal. The population as of the Canada 2016 Census totalled 239,700, making it Montreal's second largest suburb, the fifth most populous city in Quebec and twentieth largest in Canada.Montérégie is an administrative region in the southwest part of Quebec. It includes the cities of Boucherville, Brossard, Châteauguay, Longueuil, Saint-Hyacinthe, Saint-Jean-sur-Richelieu, Salaberry-de-Valleyfield and Vaudreuil-Dorion.The St. Lawrence River is a large river in the middle latitudes of North America. Its headwaters begin flowing from Lake Ontario in a (roughly) northeasterly direction, into the Gulf of St. Lawrence, connecting the American Great Lakes to the North Atlantic Ocean, and forming the primary drainage outflow of the Great Lakes Basin. The river traverses the Canadian provinces of Ontario and Quebec, as well as the U.S. state of New York, and demarcates part of the international boundary between Canada and the United States. It also provides the foundation for the commercial St. Lawrence Seaway.
Camera location

Is it worthwhile to fit a live IP camera to your web site such as Canada webcam?

Setting a live cam to your internet site is without a doubt a great solution to advertise your company. It does not matter whether it's a business site of a seashore destination, a city service, a business site of a guest house or maybe a ski lift, or a site centered on travel and leisure. A live webcam view will unquestionably have a favorable impact on the traffic on your website. Furthermore, the view from a live ip camera, for instance Canada:

You are able to shoot whatever you want. You are basically restricted solely by your will coupled with... GDPR regulations. It is simple to fit a live cam to your internet site.

The technology happens to be developed very much within past few years and an important introduction in that technology is live cams. Make sure you take advantage of this opportunity and take pleasure in astounding functions of this particular live camera in order to keep yourself updated in relation to all aspects of your trip in advance of leaving your house for that.

Just after my promotion, I was aiming to invite my boss at a restaurant however due to busy routine, I could not manage to see that restaurant to check the environment plus the quality. Because of this live camera that it allowed me to see the cafe virtually. After I went there with my manager, I experienced exactly the same atmosphere and the service quality as I had observed in the camera.