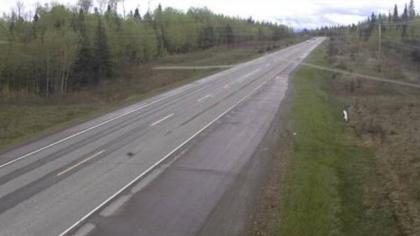 100%
Additional info
Vanderhoof is a district municipality near the geographical centre of British Columbia, Canada. Covering 2.92 square kilometers., it has a population of about 4,500 within town limits, and offers services to nearly 10,000 people in nearby rural communities. Its main industries are forestry, agriculture, and related businesses. Tourism is also growing, and mining operations are being developed in the area. It has many elementary schools, and one major secondary school, Nechako Valley Secondary School (NVSS), comprising School District 91 Nechako Lakes. The College of New Caledonia has a regional campus there.Cluculz Lake is a settlement in British Columbia, located 40 km west of Prince George alongside the Yellowhead Highway. The word "Cluculz" is translated Big Whitefish and is based on a story told by local Carrier people of a group who paddled across the lake in their canoe and were tipped over by a giant Whitefish.Highway 16 is a highway in British Columbia, Canada. It is an important section of the Yellowhead Highway, a part of the Trans-Canada Highway that runs across Western Canada. The highway closely follows the path of the northern B.C. alignment of the Canadian National Railway. The number "16" was first given to the highway in 1941, and originally, the route that the highway took was more to the north of today's highway, and it was not as long as it is now. Highway 16 originally ran from New Hazelton east to Aleza Lake. In 1947, Highway 16's western end was moved from New Hazelton to the coastal city of Prince Rupert, and in 1953, the highway was re-aligned to end at Prince George. In 1969, further alignment east into Yellowhead Pass was opened to traffic after being constructed up through 1968 and raised to all-weather standards in 1969. Highway 16's alignment on Haida Gwaii was commissioned in 1983 and is connected to the mainland segment via BC Ferries route #11.
Camera location

Is it worth to set up a live camera into your website such as Canada webcam?

The installation of a live camera in your website is actually an amazing option to advertise your business. It doesn't matter whether it is a website of a seaside resort, a city service, a website of a guesthouse or a ski lift, or a blog aimed at tourism. A live ip camera view will definitely have a positive impact on the traffic on your website. Moreover, the view from a live camera, such as Canada:

You can shoot whatever you want. You are basically limited only by your will and... GDPR regulations. You can easily setup a live camera in your website.

The website is perfect, and also the view is perfect - as always! Thanks to the camera, I can proceed to my hometown without leaving home and watch how much it has altered. I love to look here, given that the quality of the cameras is usually remarkable, and you can learn a bit about the area and read travel tips. I'm here practically every single day.

Before you visit a location, going to this great site is recommended. From Animals and zoo to world’s iconic landmarks, from tropical destinations to lands and seas, this amazing site provides you a platform to have a virtual trip round the globe. You may be there at any place of the world and you can be at another corner of the world within just a second. Isn’t it a magic!