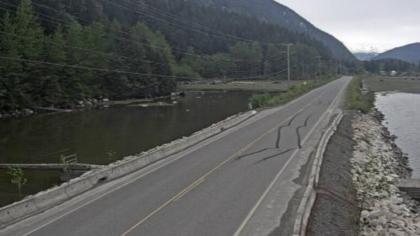 100%
Additional info
Stewart is a district municipality at the head of the Portland Canal in northwestern British Columbia, Canada, near the Alaskan panhandle. In 2011, its population was about 494.Hyder is a census-designated place in Prince of Wales-Hyder Census Area, Alaska, United States. The population was 87 at the 2010 census, down from 97 in 2000. Hyder is accessible by road only from Stewart, British Columbia, is popular with motorists wishing to visit Alaska without driving the length of the Alaska Highway, and is otherwise landlocked. It is the southernmost community in the state that can be reached via car. Hyder is Alaska's easternmost town.The Stewart–Cassiar Highway, also known as the Dease Lake Highway and the Stikine Highway as well as the Terrace–Kitimat Highway from Kitimat to Terrace, is the northwesternmost highway in the Canadian province of British Columbia. A scenic route through some of the province's most isolated areas, the highway first gained designation as British Columbia Highway 37 in the year 1975. At that time, its southern terminus was at the community of New Hazelton on the BC Highway 16. In 1975, with the completion of a new bridge over the Kitimat River, the highway's Yellowhead junction was relocated to a point on Highway 16 just south of the site of Kitwanga. Highway 37 was then extended south to Kitimat in 1986 superseding what was then designated Highway 25. At the north end, the highway briefly stretches into the Yukon, becoming Yukon Highway 37.
Camera location

Is it worth to install a live camera on your website such as Canada webcam?

I am impressed with the website. It is offering live camera and other than that, there are many other amazing things like "nearby cameras", "wikipedia info" and a lot more. With nearby camera, you can get to know which nearest place you can also check through this camera and Wikipedia info section will provide general information about the searched place.

I am a very romantic person and I prefer to spend time with my partner at a silent and peaceful place. Thanks to live camera that it has provided a way to check traffic or number of people in a place to see how much busy is it. Our trip destination selection has become really easy because of the live camera.