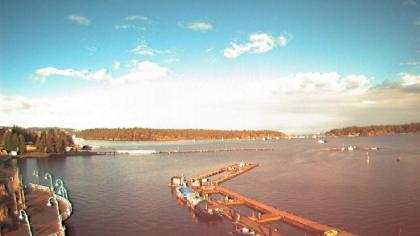 100%
Additional info
Nanaimo Harbour, also known as the Port of Nanaimo, is a natural harbour on the east coast of Vancouver Island, British Columbia, Canada. The City of Nanaimo runs along the west side of the harbour. Three islands, Newcastle, Protection, and Gabriola, along with Duke Point, form the eastern edge. The Port of Nanaimo includes the Inner Harbour, Nanaimo River estuary, Departure Bay, the waters on the east side of Newcastle and Protection Islands, and Northumberland Channel. The port is under the management of the Nanaimo Port Authority.Nanaimo is a city on the east coast of Vancouver Island in British Columbia, Canada. As of the 2021 census, it had a population of 99,863. It is known as "The Harbour City". The city was previously known as the "Hub City". This was attributed both to its original layout design, where the streets radiated from the shoreline like the spokes of a wagon wheel, and to its centralized location on Vancouver Island. Nanaimo is the headquarters of the Regional District of Nanaimo.The Regional District of Nanaimo is a regional district located on the eastern coast of Vancouver Island, British Columbia, Canada. It is bordered to the south by the Cowichan Valley Regional District, to the west by the Alberni-Clayoquot Regional District, and to the northwest by the Comox Valley Regional District. Its administration offices are located in Nanaimo. During the 2016 census, its population was established at 155,698.
Camera location

Why should you Install live buffering ip camera on the blog?

Need to make your company successful? If so, within this era of challenging competition, you could jump out among the competitors through providing something new to your customers and therefore a strategy in this regard is actually to set up live ip camera to your site. Visitors of the web site will not be in a position to see your business and its features actually consequently an affordable way presenting your company features to them is through live camera. There's a substantial effect of live streaming camera in your website traffic and it's the best way to market your business. A lot more benefits of a live website cam (Canada) involve:

It depends on yourself what you desire to show via live website cam. There is no limitation but you're just restricted to comply with General Data Protection Regulations. Setting a live streaming camera to your website takes a little time yet it's definitely important.