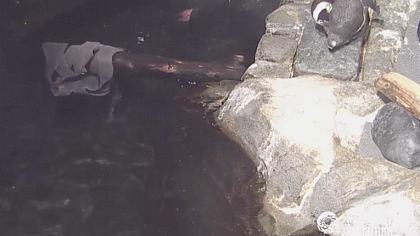 100%
Additional info
Monterey Bay Aquarium is a nonprofit public aquarium in Monterey, California. Known for its regional focus on the marine habitats of Monterey Bay, it was the first to exhibit a living kelp forest when it opened in October 1984. Its biologists have pioneered the animal husbandry of jellyfish and it was the first to successfully care for and display a great white shark. The organization's research and conservation efforts also focus on sea otters, various birds, and tunas. Seafood Watch, a sustainable seafood advisory list published by the aquarium beginning in 1999, has influenced the discussion surrounding sustainable seafood.Monterey is a city located in Monterey County on the southern edge of Monterey Bay on the U.S. state of California's Central Coast. Founded on June 3, 1770, it functioned as the capital of Alta California under both Spain (1804–1821) and Mexico (1822–1846). During this period, Monterey hosted California's first theater, public building, public library, publicly-funded school, printing-press, and newspaper. It was originally the only port of entry for all taxable goods in California. In 1846, during the Mexican–American War of 1846–1848, the United States Flag was raised over the Customs House. After Mexico ceded California to the U.S. at the end of the war, Monterey hosted California's first constitutional convention in 1849.
Camera location

Is it really worth to set up a live cam into the web site such as California (USA) webcam?

Adding a live ip camera in your blog is actually an excellent choice to advertise your company. It does not matter whether it's an internet site of a seashore vacation resort, a city service, a business site of a guest house or perhaps a ski lift, or a website focused entirely on travel and leisure. A live ip camera view will certainly have a good impact on the traffic on your website. Furthermore, the view from a live streaming cam, for example California (USA):

You may shoot whatever you want. You are basically restricted just by your will coupled with... GDPR regulations. It is simple to add a live ip camera in your blog.

Having a trip to view your favorite areas is really a costly thing and in fact, it takes time too. Nevertheless, you can observe those areas without making almost any cost and you may reach there in just a minute, how!With live digicam . It allows a person not simply to observe the well-known destinations all over the world but to check on their environment and a lot more.

This particular live camera quality is actually marvelous however occasionally it happens that the web cam doesn't work for just a moment. Nevertheless, this doesn't mean the services are bad but it's dependent on common sense that because of absence of electrical power or even harsh climate conditions, the camera could possibly get slower for a very little time. In this situation, I leave a comment for the team to make them aware about that particular live camera.