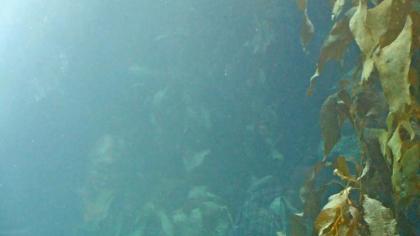 100%
Additional info
Monterey Bay Aquarium is a nonprofit public aquarium in Monterey, California. Known for its regional focus on the marine habitats of Monterey Bay, it was the first to exhibit a living kelp forest when it opened in October 1984. Its biologists have pioneered the animal husbandry of jellyfish and it was the first to successfully care for and display a great white shark. The organization's research and conservation efforts also focus on sea otters, various birds, and tunas. Seafood Watch, a sustainable seafood advisory list published by the aquarium beginning in 1999, has influenced the discussion surrounding sustainable seafood.Monterey is a city located in Monterey County on the southern edge of Monterey Bay on the U.S. state of California's Central Coast. Founded on June 3, 1770, it functioned as the capital of Alta California under both Spain and Mexico. During this period, Monterey hosted California's first theater, public building, public library, publicly-funded school, printing-press, and newspaper. It was originally the only port of entry for all taxable goods in California. In 1846, during the Mexican–American War of 1846–1848, the United States Flag was raised over the Customs House. After Mexico ceded California to the U.S. at the end of the war, Monterey hosted California's first constitutional convention in 1849.Kelp forests are underwater areas with a high density of kelp, which covers a large part of the world's coastlines. Smaller areas of anchored kelp are called kelp beds. They are recognized as one of the most productive and dynamic ecosystems on Earth. Although algal kelp forest combined with coral reefs only cover 0.1% of Earth's total surface, they account for 0.9% of global primary productivity. Kelp forests occur worldwide throughout temperate and polar coastal oceans. In 2007, kelp forests were also discovered in tropical waters near Ecuador.
Camera location

The advantages of setting up live cam on websites

Science and technology carries on growing constantly and an enhancement for business men is that they can easily add live internet streaming cam to their web-sites as a way to make the business or products far more visible on the web and then to entice increasingly more customers. Mainly, the companies associated with hospitality services, ski lift, restaurants, city service or seashore location would rather get the facility of adding live IP camera in their sites. A live streaming cam is a live presentation of your business functions and therefore you may amaze the web site traffic and make them in to your potential customers. Would like to take a look at something more about live streaming camera for instance California (USA)? Below is a list!

From tourist attractions to hospitality services, you are able to record whatever you like inside your internet site. While in the edge of GDPR policies, you might use live streaming cam in the internet site in whatever way you'll want to. Spend some time to add a live ip camera and revel in a number of perks afterward.

Having a family trip is regarded as the thrilling element in my situation even so I have young ones and so I pay special care about climate. For this reason, I have confidence in this particular live camera. Apart from climate, I'll also analyze crowd of people there. If you're packing your bag for a adventure then this particular online camera really has been developed for you.

Me along with my lady are fond of venturing out and already we have seen various destinations with each other. What I generally do is check out those spots by live web camera, take screenshots and then share with my lady and she really loves it. In the absence of this specific live web camera, recollecting my reminiscences won’t be this much simpler.