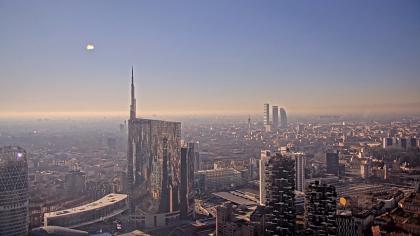 100%
Additional info
Palazzo Lombardia is a complex of buildings in Milan, Italy, including a 43-storey, 161 m (528 ft) tall skyscraper. It is the main seat of the Lombardy regional government, located in the Centro Direzionale di Milano, north-west of the city centre.Milan is a city in northern Italy, capital of Lombardy, and the second-most populous city proper in Italy after Rome. The city proper has a population of about 1.4 million, while its metropolitan city has 3.26 million inhabitants. Its continuously built-up urban area is the fourth largest in the EU with 5.27 million inhabitants. According to national sources, the population within the wider Milan metropolitan area, is estimated between 8.2 million and 12.5 million making it by far the largest metropolitan area in Italy and one of the largest in the EU.Lombardy is one of the twenty administrative regions of Italy. It has an extent of 23,844 km2 (9,206 sq mi) in the northern-central part of the country, and a population of about 10 million people, constituting more than one-sixth of the population of Italy. Over a fifth of the Italian gross domestic product is produced in the region.
Camera location

The advantages of setting up live cam on the blog

Science and technology carries on progressing consistently and an enhancement for business men is that they are able to add live internet streaming cam to their websites in an effort to make the business or products a lot more exposed as well as get increasingly more customers. Mainly, the companies associated with hospitality services, ski lift, restaurants, city service or seashore location want to get the facility of adding live cam onto their sites. A live streaming cam is a live presentation of your business functions so therefore you may astonish the web site traffic and make them in to your potential customers. Would like to take a look at something more about live streaming camera for instance Milan? Below is a list!

From tourist attractions to hospitality services, you possibly can record whatever you like inside your web site. While in the edge of GDPR restrictions, you might use live streaming cam in the web site in whatever way you'll want to. Take some time to add a live ip camera and get a number of perks afterward.