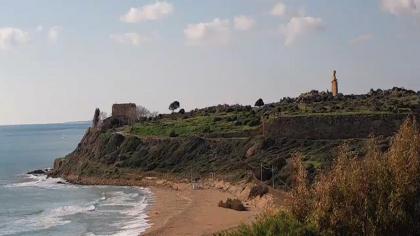 100%
Additional info
Selinunte was an ancient Greek city on the south-western coast of Sicily in Italy. It was situated between the valleys of the Cottone and Modione rivers. It now lies in the comune Castelvetrano, between the frazioni of Triscina di Selinunte in the west and Marinella di Selinunte in the east. The archaeological site contains five temples centered on an acropolis. Of the five temples, only the Temple of Hera, also known as "Temple E", has been re-erected. At its peak before 409 BC the city may have contained up to 30,000 people, excluding slaves.
Camera location