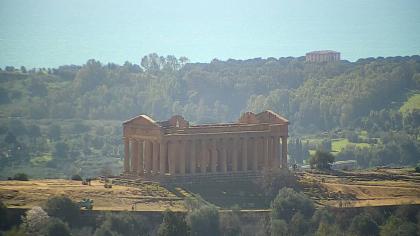 100%
Additional info
The Valle dei Templi, or Valley of the Temples, is an archaeological site in Agrigento, Sicily. It is one of the most outstanding examples of Magna Graecia art and architecture, and is one of the main attractions of Sicily as listed in 1997. Much of the excavation and restoration of the temples was due to the efforts of archaeologist Domenico Antonio Lo Faso Pietrasanta (1783–1863), who was the Duke of Serradifalco from 1809 through 1812. During the 20th century, the archeological excavation was mainly funded by Captain Alexander Hardcastle. He permitted excavations within the archaeological park including the straightening of the eight columns on the south side of the Temple of Heracles. For his contributions to archaeology he was made an honorary citizen of the city of Agrigento and was granted in 1928 the rank of Commander of the Order of the Crown of Italy.Agrigento is a city on the southern coast of Sicily, Italy and capital of the province of Agrigento. It was one of the leading cities of Magna Graecia during the golden age of Ancient Greece with population estimates in the range of 200,000 to 800,000 before 406 BC.The Province of Agrigento is a province in the autonomous island region of Sicily in Italy, situated on its south-western coast. Following the suppression of the Sicilian provinces, it was replaced in 2015 by the Free municipal consortium of Agrigento. It has an area of 3,041.90 square kilometres (1,174.48 sq mi), and a total population of 474,493. There are 43 comunes in the province.
Camera location

Is it worth to install a live camera into the website?

Installing a live camera on your website is a brilliant choice to advertise your business. It doesn't matter whether it is a website of a seaside resort, an area services, a website of a guesthouse or a chair lift, or even a blog focused entirely on tourism. A live camera view will definitely give a positive impact on the website traffic. Moreover, the scene from the live camera, such as Agrigento:

You can shoot whatever you want. You're basically limited only from your own will and... General Data Protection Regulations. Without much effort you can install a live camera on your website.

Going for a visit to see your favorite places is a costly thing and in fact, it requires precious time as well. However, you can see the places with out bearing any expense and you can reach at the favorite place within a minute, just how!With online camera . It allows you not only to see the famous places on the planet but to check their climate and a lot more.

This live camera quality is excellent but sometimes people notice that the camera does not work for a moment. However, this doesn't mean the service is poor but it is a matter of common sense that due to lack of power or harsh weather conditions, the camera may get down for just a little time. In this situation, I leave a remark to the team to ensure they are aware of that exact camera.