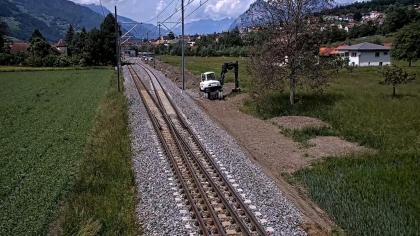 100%
Additional info
The Rhaetian Railway, abbreviated RhB, is a Swiss transport company that owns the largest network of all private railway operators in Switzerland. Headquartered in Chur, the RhB operates all the railway lines of the Swiss canton of Grisons, except for the line from Sargans to the cantonal capital, Chur, which are operated by Swiss Federal Railways (SBB CFF FFS), as well as the line from Disentis/Mustér to the Oberalp Pass and further on to Andermatt, Uri, which is operated by Matterhorn Gotthard Bahn (MGB). Inaugurated in 1888 and expanded from 1896 onwards in various sections, the RhB network is located almost entirely within Grisons, with one station across the Italian border at Tirano.The Grisons or Graubünden, more formally the Canton of the Grisons or the Canton of Graubünden, is one of the twenty-six cantons of Switzerland. It has eleven regions, and its capital is Chur. The German name of the canton, Graubünden, translates as the "Grey Leagues", referring to the canton's origin in three local alliances, the Three Leagues. The other native names also refer to the Grey League: Grischùn in Sutsilvan, Grischun in the other forms of Romansh, and Grigioni in Italian. "Rhaetia" is the Latin name for the area. The Alpine ibex is the canton's heraldic symbol.
Camera location

Is it worthwhile to put a live IP camera into the blog?

Fitting a live cam within the internet site is undoubtedly a fantastic choice to advertise your business and its features. It is not important if it is a blog of a sea side destination, an area services, an internet site of a restaurant or maybe a chair lift, or even a site focused entirely on the tourism industry. A live cam view will obviously give a great impact on the traffic. In addition, the scene from the live ip camera, just like Switzerland:

You are able to shoot whatever you want. You're basically confined solely from your own will or... General Data Protection Regulations. It's easy to put in a live cam within the internet site.

Relating to going to a recreation area, numerous things appear in mind. Is definitely the recreation area delightful? Will it be extremely crowded? Which things you can enjoy at that place? Which kind of fun perhaps there is for your children? Why not undertake a web tour to the recreation area that you might want to travel to!

Enjoying a tour offers short term fulfillment though remembering about this outing usually takes you back to those areas, in that precious time and even with those close persons who were actually with you there. Live web camera a great option to Reminisce about the stunning recollections just as you will discover those destinations live in your own home.