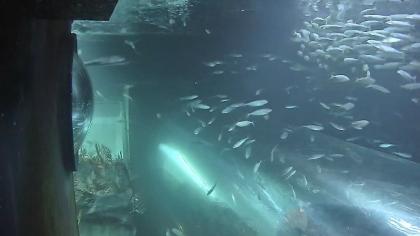 100%
Additional info
The Haus des Meeres is a public aquarium in Vienna, Austria. It is located in Esterhazy Park in downtown Mariahilf district, one block south of the busy Mariahilfer Straße. The Haus des Meeres houses over ten thousand aquatic beings on an area of around 4,000 square meters (43,000 sq ft) inside a tall concrete flak tower built during World War II. In 2012 the Haus des Meeres attracted a record high of 650,000 visitors. The Haus des Meeres is managed by Aqua Terra Zoo, a private non-profit organization which, according to its web site, receives only marginal financial support from municipal authorities. However, the maintenance costs for the former flak tower are paid by the taxpayer.
Camera location