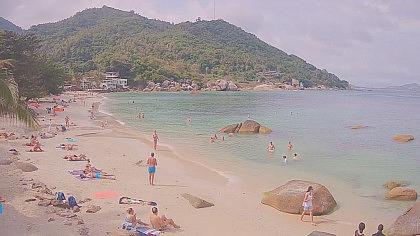 100%
Additional info
Thailand, formerly known as Siam, and officially the Kingdom of Thailand, is a country in Southeast Asia. It is located at the centre of the Indochinese Peninsula, spanning 513,120 square kilometres (198,120 sq mi), with a population of over 66 million people. Thailand is bordered to the north by Myanmar and Laos, to the east by Laos and Cambodia, to the south by the Gulf of Thailand and Malaysia, and to the west by the Andaman Sea and the southern extremity of Myanmar. It also shares maritime borders with Vietnam in the Gulf of Thailand to the southeast, and Indonesia and India on the Andaman Sea to the southwest. Bangkok is the nation's capital and largest city. Nominally, Thailand is a constitutional monarchy and parliamentary democracy; however, in recent history, its government has experienced multiple coups and periods of military dictatorships.
Camera location