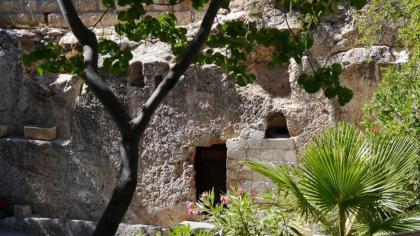 80%
Additional info
The Garden Tomb is a rock-cut tomb in Jerusalem, which was unearthed in 1867 and is considered by some Protestants to be the site of the burial and resurrection of Jesus. The tomb has been dated by Israeli archaeologist Gabriel Barkay to the 8th–7th centuries BC. The re-use of old tombs was not an uncommon practice in ancient times, but this would seem to contradict the biblical text that speaks of a new, not reused, tomb made for himself by Joseph of Arimathea. Also, the trough in front of the tomb and the nearby cistern, described by proponents of the Garden Tomb as part of the tomb's sealing system and as the surrounding garden's source of water, respectively, have both been archaeologically dated to the Crusader period. The organisation maintaining the Garden Tomb refrains from claiming that this is the authentic tomb of Jesus, while pointing out the similarities with the site described in the Bible, and the fact that the Garden Tomb better preserves its ancient outlook than the more traditional, but architecturally altered and time-damaged tomb from the mostly crowded Church of the Holy Sepulchre; for all of these reasons, they suggest that the Garden Tomb is more evocative of the events described in the Gospels.
Webcam Israel live - Location

Is it worthwhile to fit a live IP camera into the website such as Israel webcam?

Fitting a live cam to your internet site is without a doubt a fantastic choice to advertise your business. It doesn't matter whether it is a business site of a seaside destination, an area services, a website of a guesthouse or maybe a chair lift, or even a site focused entirely on tourism. A live webcam view will unquestionably give a favorable impact on the website traffic. Moreover, the scene from the live ip camera, for instance Israel:

You are able to shoot whatever you want. You're basically limited solely from your own will and... General Data Protection Regulations. Without much effort you can put in a live cam to your internet site.

The science or technology happens to be developed very much in past few years and an important introduction in that modern technology is actually live cameras. Make sure you acquire this option and take pleasure in outstanding features of this live camera to update yourself in relation to every aspect of your trip ahead of departing your home for that trip.

Just after my job promotion, I was aiming to invite my boss in a cafe but due to busy schedule, I could not find a way to see that cafe to check the environment plus the service quality. Thanks to this web cam it permitted me to visit the restaurant virtually. When I visited with my boss, I experienced the same environment and the quality just like I'd observed within the camera.