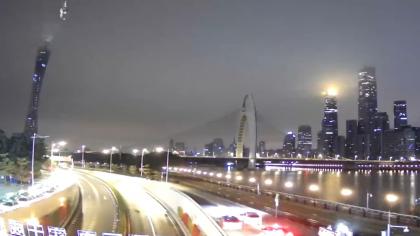 100%
Additional info
Guangzhou, also known as Canton and alternatively romanized as Kwongchow or Kwangchow, is the capital and largest city of Guangdong province in southern China. Located on the Pearl River about 120 km (75 mi) north-northwest of Hong Kong and 145 km (90 mi) north of Macau, Guangzhou has a history of over 2,200 years and was a major terminus of the maritime Silk Road; it continues to serve as a major port and transportation hub as well as being one of China's three largest cities. For a long time, the only Chinese port accessible to most foreign traders, Guangzhou was captured by the British during the First Opium War. No longer enjoying a monopoly after the war, it lost trade to other ports such as Hong Kong and Shanghai, but continued to serve as a major transshipment port. Due to a high urban population and large volumes of port traffic, Guangzhou is classified as a Large-Port Megacity, the largest type of port-city in the world. Due to worldwide travel restrictions at the beginning of the COVID-19 pandemic, Guangzhou Baiyun International Airport, the major airport of Guangzhou, briefly became the world's busiest airport by passenger traffic in 2020.Guangdong, alternatively romanized as Canton or Kwangtung, is a coastal province in South China on the north shore of the South China Sea. The capital of the province is Guangzhou. With a population of 126.01 million across a total area of about 179,800 km2 (69,400 sq mi), Guangdong is the most populous province of China and the 15th-largest by area as well as the second-most populous country subdivision in the world. Its economy is larger than that of any other province in the nation and the fifth largest sub-national economy in the world with a GDP (nominal) of 1.95 trillion USD in 2021. The Pearl River Delta Economic Zone, a Chinese megalopolis, is a core for high technology, manufacturing and foreign trade. Located in this zone are two of the four top Chinese cities and the top two Chinese prefecture-level cities by GDP; Guangzhou, the capital of the province, and Shenzhen, the first special economic zone in the country. These two are among the most populous and important cities in China, and have now become two of the world's most populous megacities and leading financial centres in the Asia-Pacific region.
Webcam China live - Location

Is it truly worth to set up a live streaming camera in your blog such as China webcam?

Adding a live streaming camera in your web site is actually an excellent method to advertise your business and its features. It is not important if it is a site of a sea side location, a city service, an internet site of a restaurant or possibly a ski lift, or a web site focused on the tourism industry. A live ip camera view certainly will have a favourable impact on the traffic on your website. In addition, the view from a live website cam, like China:

You possibly can shoot whatever you want. You are basically confined merely by your will or... GDPR regulations. It's easy to add a live streaming cam in your web site.

The planet is really so enormous that a person simply cannot visit all this. Even though tourism is my leisure activity and I have discovered numerous regions all around the globe but being a human being, I have got confines. This website has appealed me a lot and I am a regular site visitor mainly because it makes it possible for me to know our world better and it also enables me to virtually check out those places where I haven't literally went to.

Outstanding quality of the web camera, Brilliantly reproduced tones. You can observe properly what is actually happening in your area. Utilizing the live camera you are able to practically sense that you are there. In addition, I enjoy the insight into different temperature parameters. Wonderful to have the web camera in the exact location I needed it.