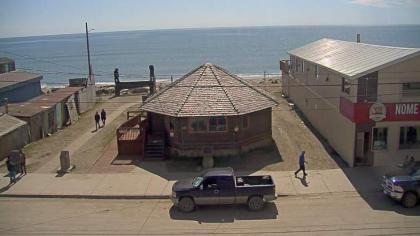 100%
Additional info
Nome is a city in the Nome Census Area in the Unorganized Borough of Alaska, United States. The city is located on the southern Seward Peninsula coast on Norton Sound of the Bering Sea. In 2018 the population was estimated at 3,866, a rise from the 3,598 recorded in the 2010 census, up from 3,505 in 2000. Nome was incorporated on April 9, 1901, and was once the most-populous city in Alaska. Nome lies within the region of the Bering Straits Native Corporation, which is headquartered in Nome.
Camera location