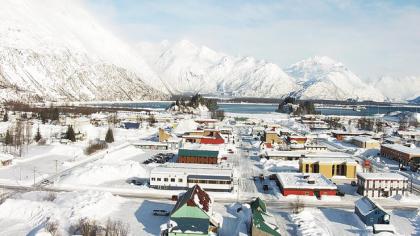 100%
Additional info
Valdez is a city in the Chugach Census Area in the U.S. state of Alaska. According to the 2010 US Census, the population of the city is 3,976, down from 4,036 in 2000. The city was named in 1790 after the Spanish Navy Minister Antonio Valdés y Fernández Bazán. A former Gold Rush town, it is located at the head of a fjord on the eastern side of Prince William Sound. The port did not flourish until after the road link to Fairbanks was constructed in 1899. It suffered catastrophic damage during the 1964 Alaska earthquake, and is located near the site of the disastrous 1989 Exxon Valdez oil tanker spill. Today, it is one of the most important ports in Alaska, a commercial fishing port as well as a freight terminal.
Camera location