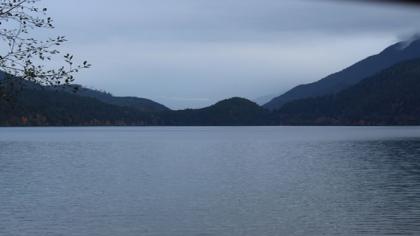 100%
Additional info
Lake Crescent is a deep lake located entirely within Olympic National Park in Clallam County, Washington, United States, approximately 17 miles (27 km) west of Port Angeles on U.S. Route 101 and nearby to the small community of Piedmont. At an official maximum depth of 624 feet (190 m) it is officially the second deepest lake in Washington. Unofficial depth measurements of more than 1,000 feet (300 m) have been rumored in the region for years, although this figure has recently been proven false after a lake-wide bathymetric survey was performed from 2013 to 2014 by Eian Ray and Jeff Enge. The results of this survey showed the maximum depth as being 596 feet. Using GIS statistical analysis, this survey also showed the lake contains approximately 0.5 cubic miles of fresh water.
Camera location