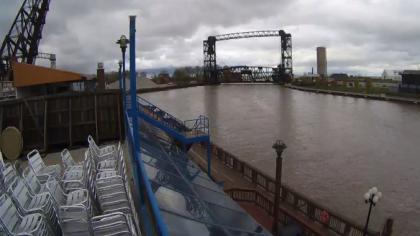 100%
Additional info
The Cuyahoga River is a river in the United States, located in Northeast Ohio, that runs through the city of Cleveland and feeds into Lake Erie. As Cleveland emerged as a major center for manufacturing, the river became heavily affected by industrial pollution, so much so that it "caught fire" at least 14 times, most famously on June 22, 1969, helping to spur the American environmental movement. Since then, the river has been extensively cleaned up through the efforts of Cleveland's city government and the Ohio Environmental Protection Agency (OEPA). In 2019, the American Rivers conservation association named the Cuyahoga "River of the Year" in honor of "50 years of environmental resurgence."
Camera location