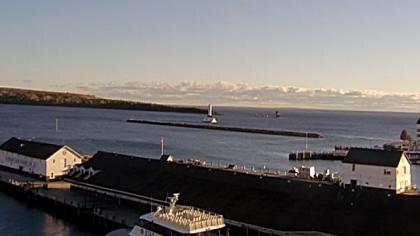 100%
Additional info
Mackinac Island is an island and resort area, covering 4.35 square miles (11.3 km2) in land area, in the U.S. state of Michigan. It is located in Lake Huron, at the eastern end of the Straits of Mackinac, between the state's Upper and Lower Peninsulas. The island was long home to an Odawa settlement and previous indigenous cultures before European colonization began in the 17th century. It was a strategic center of the fur trade around the Great Lakes. Based on a former trading post, Fort Mackinac was constructed on the island by the British during the American Revolutionary War. It was the site of two battles during the War of 1812 before the northern border was settled and the US gained this island in its territory.
Camera location