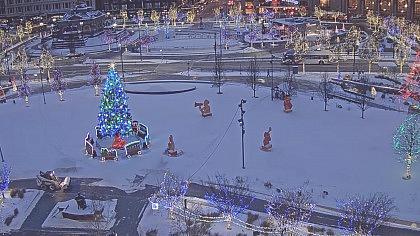 50%
Additional info
Ohio is a state in the Midwestern region of the United States. Of the fifty states, it is the 34th-largest by area, and with a population of nearly 11.8 million, is the seventh-most populous and tenth-most densely populated. The state's capital and largest city is Columbus, with the Columbus metro area, Greater Cincinnati, and Greater Cleveland being the largest metropolitan areas. Ohio is bordered by Lake Erie to the north, Pennsylvania to the east, West Virginia to the southeast, Kentucky to the southwest, Indiana to the west, and Michigan to the northwest. Ohio is historically known as the "Buckeye State" after its Ohio buckeye trees, and Ohioans are also known as "Buckeyes". Its state flag is the only non-rectangular flag of all the U.S. states.
Camera location