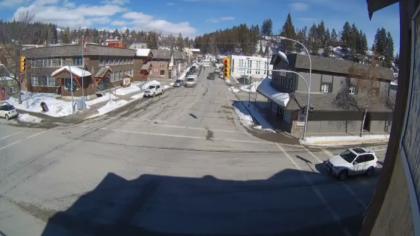 100%
Additional info
Kimberley is a city in southeast British Columbia, Canada along Highway 95A between the Purcell and Rocky Mountains. Kimberley was named in 1896 after the Kimberley mine in South Africa. From 1917 to 2001, it was the home to the world's largest lead-zinc mine, the Sullivan Mine. Now it is mainly a tourist destination and home to the Kimberley Alpine Resort, a ski area and Kimberley's Underground Mining Railway that features a 750-foot-long (230 m) underground mining interpretive centre complete with operational 3 ft narrow-gauge railway equipment. Recreational pursuits include world-class skiing, snowboarding, snowmobiling, fishing, whitewater rafting, kayaking, biking, hiking and golfing on championship golf courses. The city has the largest urban park in Canada. At 1,977 acres (800 ha), the Kimberley Nature Park is the largest incorporated park in Canada.
Camera location