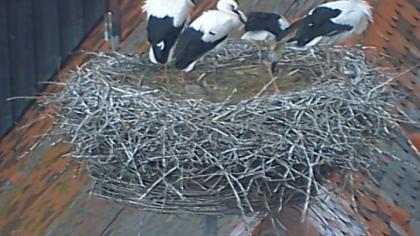 100%
Additional info
Nördlingen is a town in the Donau-Ries district, in Swabia, Bavaria, Germany, with a population of approximately 19,190. It was built in a 15 million year old & 25 km diameter wide impact crater - the Nördlinger Ries - of a meteorite which hit with an estimated speed of 70,000 km/h, and left the area riddled with an estimated 72,000 tons of micro-diamonds. The town was first mentioned in recorded history in 898, and in 1998 the town celebrated its 1100th anniversary. The town was the location of two battles during the Thirty Years' War, which took place between 1618 and 1648. Today it is one of only three towns in Germany that still have completely intact city walls, the other two being Rothenburg ob der Tauber and Dinkelsbühl.
Camera location