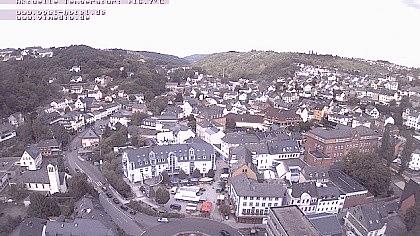 100%
Additional info
Idar-Oberstein is a town in the Birkenfeld district in Rhineland-Palatinate, Germany. As a Große kreisangehörige Stadt, it assumes some of the responsibilities that for smaller municipalities in the district are assumed by the district administration. Today's town of Idar-Oberstein is the product of two rounds of administrative reform, one in 1933 and the other in 1969, which saw many municipalities amalgamated into one. The various Stadtteile have, however, retained their original identities, which, aside from the somewhat more urban character encountered in Idar and Oberstein, tend to hearken back to each centre's history as a rural village. Idar-Oberstein is known as a gemstone town, and also as a garrison town. It is also the largest town in the Hunsrück.
Camera location