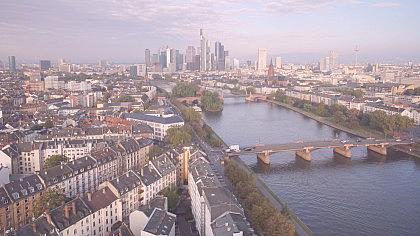 100%
Additional info
Frankfurt, officially Frankfurt am Main, is the most populous city in the German state of Hesse. Its 763,380 inhabitants as of December 31, 2019 make it the fifth-most populous city in Germany. On the River Main, it forms a continuous conurbation with the neighbouring city of Offenbach am Main and its urban area has a population of 2.3 million. The city is at the centre of the larger Rhine-Main Metropolitan Region, which has a population of 5.5 million and is Germany's second-largest metropolitan region after the Rhine-Ruhr Region. Frankfurt's central business district lies about 90 km (56 mi) northwest of the geographic centre of the EU at Gadheim, Lower Franconia. Like France and Franconia, the city is named after the Franks. Frankfurt is the largest city in the Rhine Franconian dialect area.
Camera location