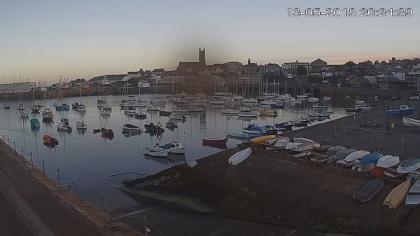 100%
Additional info
Penzance is a town, civil parish and port in the Penwith district of Cornwall, United Kingdom. It is the most westerly major town in Cornwall and is about 64 miles (103 km) west-southwest of Plymouth and 255 miles (410 km) west-southwest of London. Situated in the shelter of Mount's Bay, the town faces south-east onto the English Channel, is bordered to the west by the fishing port of Newlyn, to the north by the civil parish of Madron and to the east by the civil parish of Ludgvan. The civil parish includes the town of Newlyn and the villages of Mousehole, Paul, Gulval, and Heamoor. Granted various royal charters from 1512 onwards and incorporated on 9 May 1614, it has a population of 21,200.
Camera location