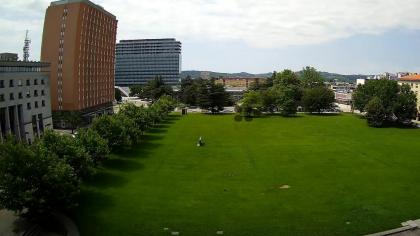 100%
Additional info
Nova Gorica (pronounced [ˈnɔ̀ːʋa ɡɔˈɾìːtsa] ; is a town in western Slovenia, on the border with Italy. It is the seat of the Municipality of Nova Gorica. Nova Gorica is a planned town, built according to the principles of modernist architecture after 1947, when the Paris Peace Treaty established a new border between Yugoslavia and Italy, leaving nearby Gorizia outside the borders of Yugoslavia and thus cutting off the Soča Valley, the Vipava Valley, the Gorizia Hills and the northwestern Karst Plateau from their traditional regional urban centre. Since 1948, Nova Gorica has replaced Gorizia as the principal urban centre of the Gorizia region, as the northern part of the Slovenian Littoral has been traditionally called.
Camera location